This is a copy of: http://hyderabadi-blog.blogspot.com/2007/10/satya-sai-babas-vishwarupa-darshanam.html 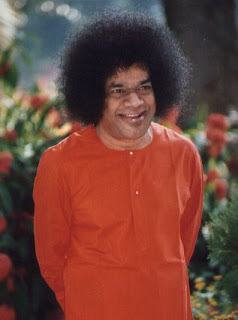 There was chaos at the Puttaparthi airport after Sai Baba devotees thronged the premises to witness the Vishwarupa darshanam of their master. They returned disappointed.

Sai Baba had earlier given darshan to his devotees at Sai Kulwant hall in Puttaparthi. After the bhajan, he told his assistant Anil Kumar that he would give Vishwarupa darshanam at around 7 pm on the northeastern direction of the airport.

As soon as Mr Anil Kumar announced this, devotees ran towards the airport chanting his name.

Television channels also telecast the news and people in Puttaparthi locked up their houses and ran towards the airport. Thousands also rushed to the area from surrounding villages.

All the devotees crowding the area focused their attention on the northeastern direction in the sky. 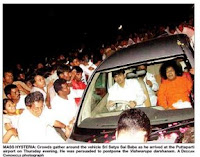 In a fit of devotion, some of them surrounded the car of Sai Baba and he could not come out. Devotees did not relent even after members of Satya Sai Trust urged them to sit down. Instead, they ran after the car.

A small stage was set up before the car for Viswarupa Darshanam but Sai Baba could not reach the stage as devotees prostrated before him. He was forced to remain in the car for about an hour.

A short while later, the office-bearers of the Satya Sai Trust announced that the Viswarupa Darsanam was postponed because of the non-cooperation of devotees and the cloudy weather. Sai Baba then returned to his Ashram.

Sai Baba devotees in other countries also called up their friends and relatives in Puttaparthi to find out about the incident.

Because of the rush, traffic on the road from Puttaparthy to the airport was thrown out of gear. At one stage, doors of the airport had to be closed. Police finally cleared the traffic to enable Sai Baba to return to his Ashram.

Most devotees expressed disappointment at not being able to see the Viswarupa Darsanam.